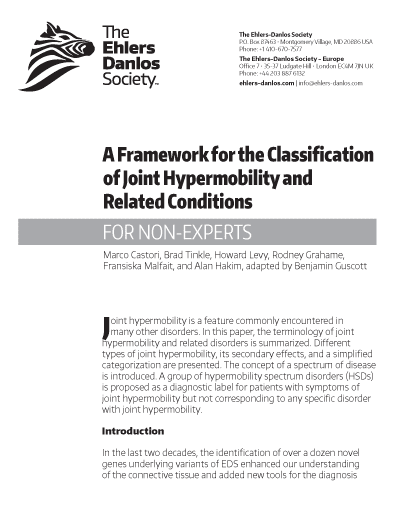 In the last two decades, the identification of over a dozen novel genes underlying variants of EDS enhanced our understanding of the connective tissue and added new tools for the diagnosis and management of patients. Many EDS patients, however, still remain without a laboratory confirmation and this lack of knowledge contributes to the patients’ burden as they struggle to find the correct treatment and care. This is mostly the case for individuals affected by the two largely overlapping conditions previously termed Ehlers-Danlos syndrome, hypermobility type (EDS-HT) and joint hypermobility syndrome (JHS). The inconsistency of clinical signs emerged from expert opinion; a study demonstrated a significant proportion of patients fit both JHS and EDS-HT. The new classification for EDS proposes a unified set of criteria for a single entity called hypermobile EDS (hEDS), However, this leaves many with symptomatic joint hypermobility (JH) and/or features of hEDS, who do not meet the stricter criteria. The classification of such cases is needed.

Joint hypermobility (JH) is the term universally accepted to define the capability that a joint (or a group of joints) has to move beyond normal limits. Hence, JH is a descriptor rather than a diagnosis. JH may exist as an isolated finding, but is often a feature of a larger diagnosis. Synonyms of JH include joint laxity and double-jointedness. In general terms, joint hyperlaxity is often considered a further synonym of JH. Establishing whether a joint is hypermobile or not is a relatively easy task and it is carried out by (i) using professional tools, such as the orthopedic goniometer; (ii) following specific procedures; and (iii) comparing the measured range of motion (ROM) with normal parameters.

Clinical practice and the literature suggest the existence of two additional forms of JH. Peripheral joint hypermobility (PJH) is a potentially discrete form of JH that is noticeable in the hands and/or feet only. It is not defined as localized due to involvement of the four limbs, but, at the same time, PJH is distinguished from GJH by the absence of large joint involvement.

Joint instability (JI) has in the past been used as a synonym of JH. However, JI indicates the pathological process manifesting with recurring damage, while JH is a broader condition of excessive movement of the joint. JI can be considered a possible complication of JH, which, in turn, doesn’t show symptoms. Not all unstable joints are hypermobile.

The recent observation of a high rate of nerve problems in adults with common EDS subtypes may mean there is a direct relationship between connective tissue function and abnormal pain.

It is common to find JH coupled with reduced sense of position and muscle weakness. Reduced position sense and muscle strength significantly influence each other and might generate a vicious circle of increasing limitation of activities of daily living in those with EDS. JH is often asymptomatic. Doctors usually recognize JH when it runs in association with additional signs. Patterns of JH-related problems are highly variable and strongly affected by other factors (e.g. mechanical forces, lifestyle, accidents). They are not directly due to the underlying cause of the JH but instead are secondary effects.

EDS is probably the default diagnosis of many patients with multiple manifestations combined with JH. Other inherited disorders of the soft connective tissue with JH include Marfan syndrome. Molecular discoveries have allowed the identification of an increasing number of uncommon, rare, and ultra-rare conditions with JH. For patients affected by such conditions, molecular testing is usually the ultimate tool for reaching the correct diagnosis.

However, for the hypermobile variant of EDS, there is no known genetic marker.Therefore the diagnosis of hEDS remains a clinical diagnosis.

We propose that individuals with JH may be classified as follows:

HSDs are a group of conditions related to JH and are intended as descriptive and exclusion diagnoses. They are distinguishable from hEDS and the other disorders with JH because HSDs are usually limited to muscles, joints, and bones. In these patients, a limited extension to other organs and tissues is possible but does not fit the criteria for one of the various EDS types. Therefore, HSDs are mostly intended as alternative labels for patients with symptomatic JH who do not have any rare type of EDS and do not meet the criteria for hEDS.

Although HSDs share JH with the other specific disorders and, in particular with EDS, at present it is premature to define HSDs as inherited disorders. In fact, their basis remains unknown. Publications show association between GJH and other disorders, the strongest being with anxiety disorders, high heart rate on standing, gastrointestinal disorders, and pelvic and bladder dysfunction. These associations are often real and relevant and may be commonly encountered in conditions with JH, in particular hEDS, impacting on the quality of life and management of affected individuals. These complications should be defined as JH related co-morbidities.

Asymptomatic JH, hEDS, and HSDs manifestations are variable but largely overlapping, so can be thought of in terms of a single spectrum ranging from isolated JH to full-blown hEDS passing through the various HSDs. The existence of this spectrum is due to the possibility of transition from one type to another. This approach may be relevant for diagnosing patients at risk of developing signs of hEDS, or those with HSD who get better. The new terminology updates and substitutes all previous terms to define patients with JH but without a proved specific disorder. 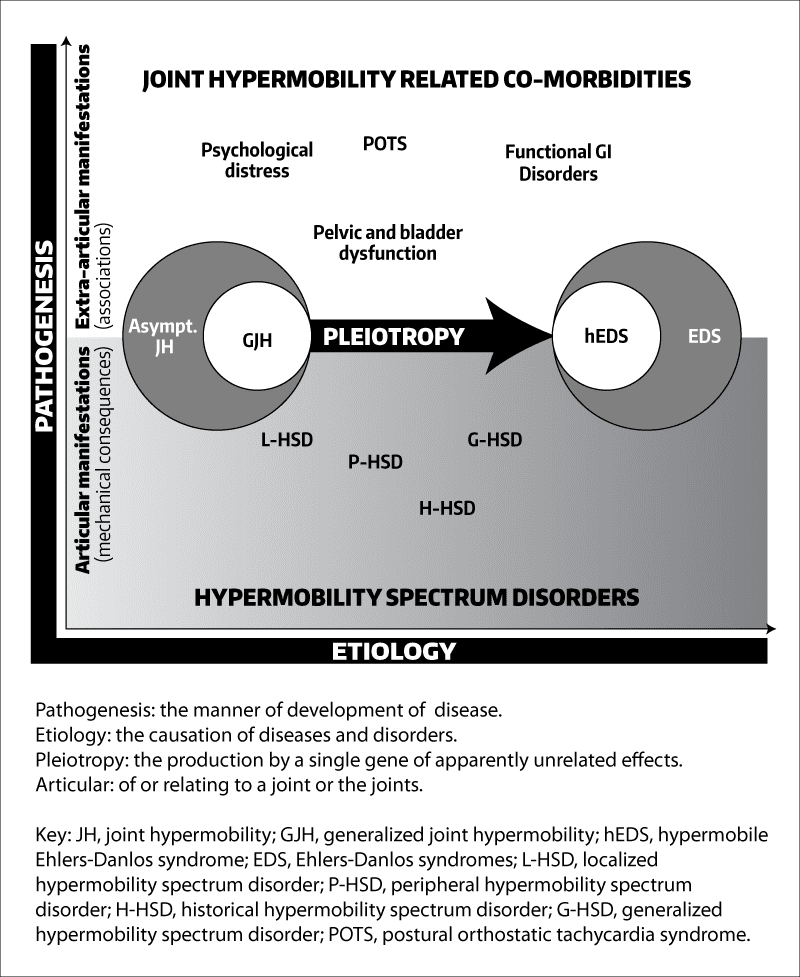 Diagram of the terminology introduced by the new classification for Ehlers-Danlos syndrome (EDS) and joint hypermobility (JH). The variability is represented by the vertical (disease development) and horizontal (disease cause) lines. In the middle, the relationships between symptomless JH and EDS. Generalized joint hypermobility (GJH) and hypermobile EDS (hEDS) are highlighted as the closest types, below them, the “realm” of the hypermobility spectrum disorders (HSDs) as outlined in the present article. HSDs group together JH plus one or more of its other manifestations, but not meeting the criteria for any type of EDS. Above JH and EDS, the wide spectrum of JH-related conditions that may occur. JH-related conditions include an expanding group of common disorders that show an association with JH, but their cause and development is complicated by a variety of acquired factors. EDS, Ehlers-Danlos syndrome (various types).

Conclusions and the Future

Putting order to the field of JH is challenging and much more work is needed for reaching a full picture of what JH represents for human health and disease. The restyling of JH and related conditions is not intended as a rigid rule for medical and non-medical professionals, but as an updated framework based on a wider perspective and on the most recently available data for nurturing more research. Dissecting the basis of hEDS, HSDs, and isolated JH could be one of the future goals of the scientific community. This knowledge will surely ease patients’ classification, and, perhaps, will better decide the use of medical and economic resources. At the same time, exploring the links connecting JH, its manifestations, and mechanisms underlying the JH-related problems is the greatest challenge for those involved in the daily management of patients with JH.