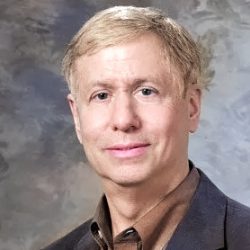 Daniel S. Greenspan, Ph.D. is Kellett professor of Cell and Regenerative Biology at the University of Wisconsin-Madison. He received an undergraduate degree with majors in Biology and in English Literature from New York University, after which he received M.S. and Ph.D. degrees in the Department of Pathology at NYU Medical School. Following this, he served as a postdoctoral fellow of the Arthritis Foundation in the Department of Human Genetics at Yale Medical School, where he trained in molecular biological and genetics techniques in studies of HLA genes and RNA splicing. He subsequently started his own lab in the Department of Pathology and Laboratory Medicine at the University of Wisconsin-Madison School of Medicine, where he applied molecular and cell biological techniques to study genes and diseases of the extracellular matrix (ECM). In 2010, Dr. Greenspan switched from the Department of Pathology and Laboratory Medicine to the newly formed Department of Cell and Regenerative Biology at the University of Wisconsin School of Medicine and Public Health, and served in the capacity of founding interim chair from 2010 – 2014). The Greenspan lab was the first to clone sequences for several collagen genes, and to show that BMP1-related metalloproteinases are responsible for converting procollagens and other ECM precursors into mature functional proteins. His lab was engaged in collaborative studies that showed the type VII collagen gene COL7A1 to be the locus for dystrophic epidermolysis bulls, and showed involvement of the BMP1 gene in some cases of osteogenic imperfecta. His lab was the first to show that COL5A1, a type V collagen gene, is a locus for mutations that underlie classical Ehlers-Danlos syndrome, and he has continued to pursue studies into the molecular bases and nature of Ehlers-Danlos syndrome.