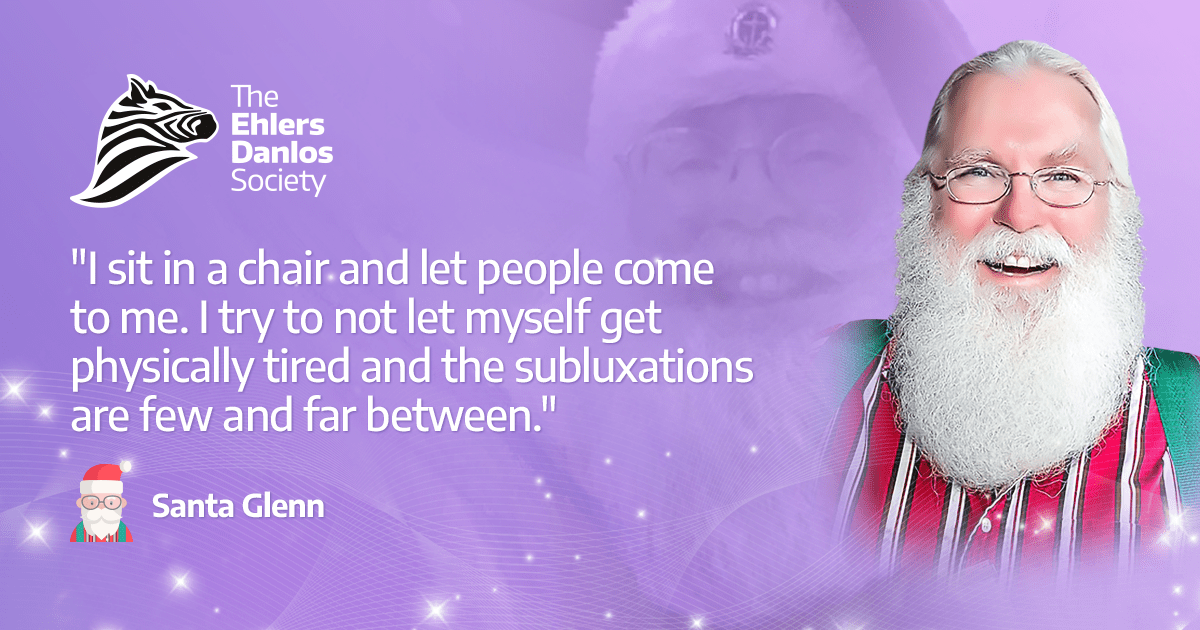 I was born in 1958 as a 4 lb 13 oz handful baby. My limbs were reported to be rubbery, they told me I was nearly 4 before I started walking. I spent my entire childhood and all the way to adulthood as the smallest person in any crowd.  I am, at 60 years ,still only 5’6.

As a 9-year-old the doctors thought I just wasn’t thriving so they got me a bicycle and a paper route. From ages 9-14 I delivered newspapers on 13 different routes. Being replaced by adults with cars on all the routes I’d had, when the adults would quit I’d take over and continue because I knew every home that took the paper. I once delivered 1463 in one day. I collapsed, exhausted for two days. My arms dislocated and I woke up in pain and trapped until I could use my legs to throw myself off the bed. My shoulders snapped in place as I hit the floor. It only happened when I was very tired, twice more.

I joined the airforce at age 22 and it happened again. My final diagnosis happened after 24 years of service. when, after a new very vigorous mandatory physical exercise, I left the field with everybody else and went to the gym to work out on the machines. I leg lift 700 lbs, routinely noticed by everybody. On leaving the gym, very relaxed, I stepped off the curb and my right hip fell out of its socket. I had to be carefully taken to the hospital. They got the joint back in place but it wouldn’t stay, then the other one came out. and one shoulder. They put me together and strapped my joints, and as my muscles recovered they were able to keep the joints together. They found 146 small lumps under my skin everywhere.

At 46 years old after a very distinguished career, I was finished. I could no longer deploy so they forced me to take retirement. The doctor that diagnosed me said I’d never be able to hold a job unless I could find a place where I could sit in a chair and let people come look at me. I was shocked. I had been an Electronic Communications Engineer. Shortly after this, I had four months of leave so we held a quick retirement ceremony where they gave me several medals. I went on 120 days of leave till my real retirement day in January 2004. My then-wife broke her hip in August, and after recovery her doctor wanted me to take her to the local Mall for walk therapy. While walking slowly, I passed a photo Set in JCPenney, a photographer saw me with my new white beard, high cheekbones, and blue eyes. She grabbed a camera took a shot of me and asked me to wait. She came out after sending my picture to her boss and offered me a contract to be their corporate Santa. Traveling through every store in four states. where (get this) “I sit in a chair and let people come to me”. Just Like that doctor said! I try not to let myself get physically tired. And the sublocations are few and far between. You can find me at www.SantaClausLives.com