Gastrointestinal Involvement in the Ehlers-Danlos Syndromes (for Non-experts) 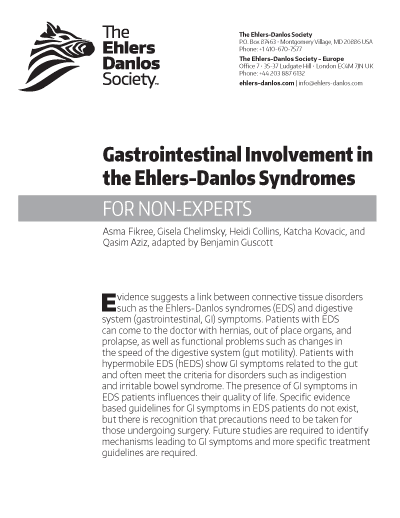 Evidence suggests a link between connective tissue disorders such as the Ehlers-Danlos syndromes (EDS) and digestive system (gastrointestinal, GI) symptoms. Patients with EDS can come to the doctor with hernias, out of place organs, and prolapse, as well as functional problems such as changes in the speed of the digestive system (gut motility). Patients with hypermobile EDS (hEDS) show GI symptoms related to the gut and often meet the criteria for disorders such as indigestion and irritable bowel syndrome. The presence of GI symptoms in EDS patients influences their quality of life. Specific evidence based guidelines for GI symptoms in EDS patients do not exist, but there is recognition that precautions need to be taken for those undergoing surgery. Future studies are required to identify mechanisms leading to GI symptoms and more specific treatment guidelines are required.

Association Between hEDS and GI Symptoms

The association between hEDS and GI symptoms was first described 12 years ago, finding that hEDS patients attending a clinic had significantly more GI symptoms compared to controls (37% vs. 11%). The most common GI symptoms were nausea, abdominal pain, constipation, and diarrhea. Problems with the automatically controlled (autonomic) bodily functions (including blood pressure and heart rate) were proposed to be a cause. Since then it has been shown that fast heart rate on standing (postural tachycardia syndrome, POTS) is associated with GI symptoms such as nausea, reflux, bloating, constipation, and diarrhea. Suggesting that hEDS, autonomic symptoms, and GI symptoms are indeed linked, though the exact mechanism is unknown. Other studies have confirmed that GI symptoms are common in patients with an existing diagnosis of hEDS. In a small study, 87% of patients were found to have GI symptoms. In a study of 600 people, approximately one-third of unselected patients attending GI clinics had previously undiagnosed hEDS based on validated clinical criteria; however, the GI symptom profile in these patients is less severe than that observed in patients with established hEDS who were referred from elsewhere. The investigators concluded that hEDS is common in GI clinics.

GI Symptoms in Other Subtypes of EDS

GI symptoms have been described in classical and vascular subtypes, as well as in patients with tenascin-X deficiency. In classical EDS (cEDS), the development of small pockets in the bowel (diverticular disease) has been described.

Various GI problems in vascular type of EDS (vEDS) have been described, primarily organ perforation and or bleeding. Cases of gut perforation in relatives have occurred, and there appears to be increased risk of large intestine perforation during colonoscopy. Small intestine perforation can also occur, either with or without obvious signs, and even throat perforation has been described. vEDS can be complicated by abnormal diaphragm shape. After surgery, gut artery blockage and other complications can also occur in vEDS. In addition, rupture of the liver and spleen as well as bleeding after surgery has been reported in these patients. In a review of surgical complications in vEDS, 44 GI and 45 blood vessel complications of vEDS were reported between January 1975 and July 1995.

GI symptoms in patients with tenascin-X (TNX) deficiency (classical-like EDS, clEDS) include abdominal pain, lack of intestine movement, and perforations with hernia occurring after surgery. Long-term constipation and rectal prolapse, small pockets in the bowel, prolapse of the uterus, and stomach hernia have also been described. Increased incidence of GI problems in family members of TNX-deficiency patients have been described including chronic constipation since childhood and rectal prolapse.

There are currently no well-validated guidelines for the management of EDS-related digestive system (gastrointestinal, GI) symptoms. GI symptoms are normally managed on grounds of experience using best practice, models, and evidence.

There are reports of improvement of hEDS-related symptoms following patient-led trial-and-error diets, as well as through the use of nutrition via a tube or into a vein. Carefully controlling nutrient intake using supplements and changing lifestyle may have an effect on symptom severity in EDS. In the author’s own experience, low FODMAP (fructose, oligosaccharides, disaccharides, monoamines, and polyols) diet is frequently used to good effect for bloating, pain, and diarrhea; these features often overlap with irritable bowel syndrome (IBS) where the efficacy of this diet is now well established. As approximately 37% of patients with a diagnosis of IBS meet the criteria of hEDS, it is not surprising that benefit of this diet is being seen. However, further studies are required to determine the effectiveness of the diet in patients with GI symptoms associated with hEDS.

Surgical management of patients with vascular EDS who suddenly develop GI complications such as bleeding or perforation has been described. These approaches range from conservative non-surgical management of intestinal perforation to more conventional surgery with removal of segments of the gut. It has been suggested that during surgery, all organs must be treated gently due to fragility. Surgery in patients with EDS appears to be associated with a high risk of complications, which is why options should be carefully considered. Furthermore, optimal therapy for these patients includes the awareness that EDS is a disease involving fragility and bleeding in many organs. A nonsurgical approach can be the best choice for these patients, depending on the condition.

A significant proportion of patients with certain GI disorders meet the criteria for hEDS. These patients have a different disease appearance, with more long-term pain, distress, anxiety, problems with automatic functions like blood pressure and heart rate, and poorer pain-related quality of life. The management of these patients may differ. For instance, those with overlap may require earlier identification and need management from many specialists.

Pain is common in patients with EDS. It is, therefore, likely that opioids will be considered in the management of these patients, which can significantly influence GI function and lead to deterioration in symptoms. Hence, avoidance of opioids should be a consideration in those with GI involvement.

It is clear that GI symptoms can occur in all EDS subtypes. GI perforations and bleeding complications are less likely in hEDS and most likely in vEDS than in the other subtypes, but a high occurrence of hEDS in GI disorders such as indigestion.

There are significant knowledge gaps and future work will be needed to address these, including: (1) the cause of GI symptoms in individuals with EDS. (2) Which EDS individuals will develop GI symptoms and how they progress over time. (3) What other factors worsen GI conditions in EDS such as poor nutrition, life events, and viral infections. (4) Improving our understanding of the above factors will enable the development of better treatment strategies. (5) Identification of the nature of connective tissue problems in EDS and its relation to GI tract function. (6) The mechanism of the link between EDS and fast heart rate on standing (postural orthostatic tachycardia syndrome, POTS). (7) Researching the signaling between cells and the structural network that surrounds them, with a view to finding treatable targets in the future. (8) Genetic studies on families of patients with hEDS to pave the way for identifying the underlying causes in this difficult to understand disorder.

Current literature suggests an association between all subtypes of EDS and GI symptoms. This association is common and has hitherto been underestimated. Evidence for GI symptoms to be included as a major EDS diagnostic criteria is compelling. However, a relationship between abnormalities in connective tissue and GI symptoms has not yet been established. Similarly, specific evidence based guidelines for EDS patients with GI symptoms are not yet available.