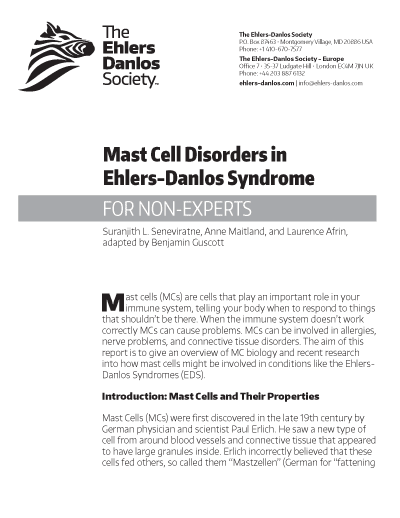 Mast cells (MCs) are cells that play an important role in your immune system, telling your body when to respond to things that shouldn’t be there. When the immune system doesn’t work correctly MCs can cause problems. MCs can be involved in allergies, nerve problems, and connective tissue disorders. The aim of this report is to give an overview of MC biology and recent research into how mast cells might be involved in conditions like the Ehlers-Danlos Syndromes (EDS).

Introduction: Mast Cells and Their Properties

Mast Cells (MCs) were first discovered in the late 19th century by German physician and scientist Paul Erlich. He saw a new type of cell from around blood vessels and connective tissue that appeared to have large granules inside. Erlich incorrectly believed that these cells fed others, so called them “Mastzellen” (German for “fattening cells”). Mast cells are actually part of the immune system, protecting the body from parasites and other things that shouldn’t be there.

MCs first develop from blood stem cells in the bone marrow, then change further depending on where in the body they end up. Unlike other immune cells it is normal for mature (fully changed) MCs to stay around the tissue they moved to (such as nerves and blood vessels). Mast cells work by being “activated” by things the body interprets as potentially harmful, the mast cells then release histamine and other molecules into the surrounding tissue to signal a response from the body, which leads to swelling, warmth, and redness (inflammation). MCs are best known for their role in allergic responses like asthma, food allergy, and anaphylaxis, but recent research suggests they may have a role in many non-allergic disorders.

Cells of the body are surrounded and supported by a network called the Extracellular Matrix (ECM), which can be made from structural materials like collagen. Structural materials like collagen play an important role in the connective tissue of the body generally, and are associated with the Ehlers-Danlos syndromes (EDS). MCs can stick to the ECM, which in turn alters their behavior. EDS, as a connective tissue disorder, could change the ECM enough to cause a change in MC behavior.

Mast cell activation disorder (MCAD) is a condition where someone has an increased activity of MCs. A proportion of people with the hypermobile type of EDS (hEDS) also have MCAD, leading to the possibility of a link between the conditions; research appears to support this link. In one study, 66% of patients with both a high heart rate when standing (Postural Tachycardia Syndrome or POTS) and EDS also had symptoms consistent with a form of MC activation.

The features of MCAD in patients can be very varied, probably because of the genetic differences of each person. Symptoms can include itching, redness, and damage to the skin, diarrhea, or pain in the abdomen among others. Common triggers of MCAD are as follows: alcohol, heat, drugs, invasive procedures (surgery, biopsy, endoscopy), insect stings, high body temperature (fever) or infection, exercise, physical contact (pressure, friction), emotions/stress.

Laboratory tests should focus on testing blood and urine samples for chemicals specific to MCs, although some of these tests are either not good enough for proper diagnosis, not usually available to a family doctor, or are expensive. A doctor may want to test the levels of some or all of the following molecules: serum tryptase, plasma histamine, prostaglandin (PG)D2, as well as urinary (random and 24-hr) histamine, N-methylhistamine (NMH), PGD2, 11-b-PGF2a, and leukotriene (LT) E4. Taking a small sample of the gut and testing for MCs may be helpful. Some of the tested molecules do not stay in the body for long or can break down outside the body, so the collection and storage of these samples should keep this in mind. Negative tests in those with likely MCAD may need repeating when the patient has more obvious symptoms.

Having EDS and MCAD together is not known to affect the method of treatment. MCAD is currently incurable; except for a rare subtype called solid mastocytoma, therapy is limited to the control of symptoms. An effective doctor is critically important for successful management of most complex diseases, including MCAD. The absence of a local “doctor/partner” who can reliably help the patient access local and remote health care resources could lead to the MCAD patient facing difficulty in gaining and then maintaining control over their disease.

Finding out what triggers symptoms and avoiding these things is important (foods, chemicals, medication, or other causes). It is important to note that MCAD patients can have a reaction to non-drug ingredients in a medication. If a reaction occurs after the first few doses of a new drug, the ingredients should be reviewed to find a possible cause, then alternatives found. MCAD patients may need custom made formulations of their medications. Some patients react to a range of foodstuffs; removing ingredients from the diet then reintroducing them one by one (an elimination diet) can help some, but not all of these patients. It is important to keep as many others the same as possible: changing medication at the same time could cause confusion if a reaction reoccurs.

In spite of the tiredness and ill health that many MCAD patients experience, they should be encouraged to exercise regularly. This should only be to the individual limit of tolerance that each patient has likely learned from experience. This is because overexertion could trigger a flare of MC activation in some patients. Since both physical and psychological stress have long been known to activate MCs, things that reduce stress (e.g., psychotherapy) can be helpful. Desensitization therapy (slowly increasing exposure to the thing causing allergy) can be considered.

All patients likely to suffer from an extreme reaction (anaphylaxis) should be prescribed two self-injectable epinephrine devices and taught how and when to use them. Many drugs have been shown to significantly help MCAD patients, but there are not yet methods to predict who will respond to which drug and who will not. Drug treatment needs to be tailored to the individual patient as their tolerance and the benefit they receive tends to vary. Commonly used medications include H1 and H2 antihistamines, sodium cromoglicate, ketotifen, omlalizumab, and the leukotriene receptor blockers. Other medications that patients may find helpful include: vitamin C, aspirin, flavone analogs, and cannabinoids. Medications should usually be added one at a time, with an adequate time interval between the additions of successive drugs. Some patients need to begin medications at a lower dose and then gradually escalate to a standard dose. Patients should be told that effects may take a few weeks to occur.

Next to fatigue, pain is one of the most common symptoms of MCAD. NSAIDs like aspirin and ibuprofen help some patients but are triggers (potentially to anaphylactic extent) in others and must be started carefully. Narcotics, too, are common triggers; fentanyl, tramadol, and hydromorphone tend to be better tolerated than others in MCAD patients. Sometimes other classes of MC-targeted agents typically without analgesic effect nevertheless prove analgesic (e.g., antihistamines may relieve chronic migraine headaches in some MCAS patients).

There are no large high-quality studies of any intervention for MCAD. The patient and treating doctor alike must take a methodical approach in trying the many therapies that may help, limiting to one change at a time in whenever possible. Most such treatment trials need last only 1–2 months, typically starting at low doses and escalating step-wise as tolerated to identify effective dosing. In the absence of a more scientifically informed strategy at present, proceeding in order of treatment cost often is the most reasonable approach.