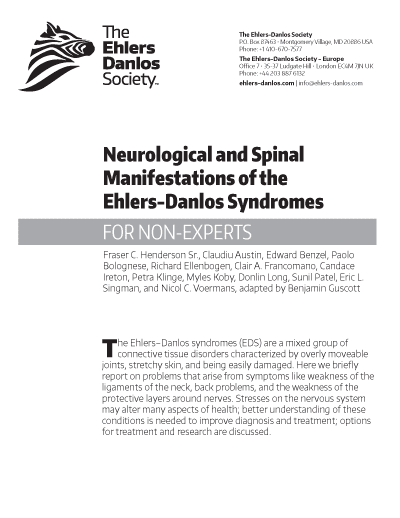 The Ehlers–Danlos syndromes (EDS) are a mixed group of connective tissue disorders characterized by overly moveable joints, stretchy skin, and being easily damaged. Here we briefly report on problems that arise from symptoms like weakness of the ligaments of the neck, back problems, and the weakness of the protective layers around nerves. Stresses on the nervous system may alter many aspects of health; better understanding of these conditions is needed to improve diagnosis and treatment; options for treatment and research are discussed.

EDS patients commonly suffer a variety of headache types. These include headaches due to migraines (long-lasting headaches, usually felt as a pulsing pain on one side of the head), muscle tension, high blood pressure, and other physical conditions. Migraine, already common in the general population, is more common in women than men and in those with Ehlers-Danlos syndrome (EDS) which also occurs more often in females, therefore, EDS may be considered a risk factor for migraine. Migraine often appears alongside other medical conditions, particularly where there is a poor regulation of blood flow in the brain. Many migraine therapies exist, including botulinum toxin, triptans, and caffeine, but success can depend on the cause. Recognizing that migraine patients suffer multiple pain problems should prompt a broad treatment strategy or a combination of therapies.

Areas needing research: (1) The connection between migraine, EDS and mast cell activation syndrome (MCAS). Heart function/structure problems, such as rapid heart rate upon standing (postural orthostatic tachycardia syndrome, POTS) and a hole between the chambers of the heart. (2) The connection between migraine and diet in EDS. (3) The impact of migraine in all types of EDS and how common it is. (4) Treatment of migraine in EDS. (5) Effect of other problems existing alongside migraine, medications, and nutrition in EDS related to how common migraines are, their severity, or treatment.

Idiopathic intracranial hypertension (IIH) is a poorly understood condition but involves increased fluid pressure under the skull, it includes symptoms such as headaches, visual disturbances, light sensitivity, and sometimes the perception of noise (tinnitus), nausea, and vomiting. Affected patients may have changes in vision, with 10% developing blindness. Female-to-male ratios range from 4:1 to 15:1, and obesity is an added risk for this. Some reports have suggested an association between EDS and IIH, but it is not formally recognized. IIH may be caused by too much of the liquid around the brain (cerebrospinal fluid, CSF) being made, or less being absorbed, excessive brain water content, and increased blood pressure in the brain. Recent studies show up to 93% of patients with IIH have narrowing of veins under the skull, which may be playing a role in the disease. Treatments include lifestyle changes targeting weight loss, decreasing the amount of fluid around the brain.

Areas needing research: (1) Who is affected and how IIH occurs in EDS. (2) Research to assess the effectiveness and risks of therapies in the EDS population.

Chiari malformation Type I (CMI) has been reported as a condition that can occur with hypermobile EDS (hEDS). The average age of onset tends to be younger in the CMI and EDS subgroup when compared to the general CMI population. CMI is a disorder affecting the tissue around the brainstem, in which a lack of space causes obstruction of the normal fluid movement around the brain. Obstruction of fluid circulation may flatten the pituitary gland, leading to hormone changes. Surgery should be urgently performed in the presence of worsening neurological problems. Managing both CMI and EDS is particularly difficult due to the head and neck being overly moveable, with increased risk of fluid (CSF) leaks. CMI may be mild enough not to need surgery, and some cases can get better spontaneously.

Areas needing research: (1) The number of cases of CMI and its variants in the EDS population needs better understanding. (2) The involvement of an overly moveable head/neck in CMI has been described but is not fully recognized among those who perform surgery. Research in EDS patients with this condition is needed to improve management methods.

Atlantoaxial instability (AAI) is a potential complication of all forms of EDS. Slow development of movement skills, headache, and limb weakness have all been attributed to loose ligaments and overly moveable joints connecting the head and neck. The interface between the first and second vertebrae (neck bones) below the skull is the most mobile joint of the body. The structural and movement properties of this joint are produced by ligaments, which can stretch more than normal in hEDS. When these ligaments are stretched too much by rotation, they can cause stretching and kinking of arteries, causing blood supply problems. The first line of treatment should be a neck brace, physical therapy, and avoidance of activities that provoke exacerbation of symptoms. Surgery can be used to fuse the two joints in extreme cases.

Areas needing research: (1) Details of AAI in the EDS population. (1) Specialist imaging research to help diagnosis. (3) Quality of treatment and the longterm benefit in EDS.

Craniocervical instability (CCI) is a type of loose ligament condition in EDS that results in injury to the nervous system. CCI occurs when ligaments from the skull to the spine don’t restrict unsafe movement. Nervous damage from loose ligaments may explain slow development of moving skills, poor coordination, learning difficulties, headaches, and clumsiness in the EDS population. There is increased recognition of mechanisms of nerve injury from stretching and bending. Surgery may be needed in cases of severe headache and worsening function due to problems in the brainstem and upper spinal cord after failure of non-surgery options. Though there are no established guidelines for treatment in EDS, there is information available for the diagnosis and treatment of CCI in various other connective tissue disorders.

Areas needing research: (1) How common CCI is in EDS. (2) Making sure methods for finding CCI in EDS are helpful. (3) Development of an international data registry to help start trials for CCI therapy in EDS.

The spine is made of individual bones called vertebrae; these sit on a cushion of connective tissue called intervertebral discs. Overly moveable (unstable) vertebrae can lead to damage to discs, vertebrae, and nerves in hEDS and classical type EDS. Those with EDS can also have unusual curves in the spine, which affects susceptibility to these problems. Generally, an overly moveable spine in EDS patients can lead to worsening symptoms related to damage to the spinal cord, as well as neck and chest pain. Initial management includes using a neck brace and physiotherapy with someone knowledgeable in problems associated with EDS, as well as managing posture and avoiding certain activities. Rest will often improve symptoms. If initial treatments fail, surgery can be used to join (fuse) vertebrae. Motion-restriction technology may be an important option in this population.

Tethered cord syndrome (TCS) is a condition that can be present in EDS, where the spinal cord is attached to surrounding tissue in a way that creates elongation and tension of the nervous tissue, leading to low back pain, loss of bladder control, lower body weakness, and loss of sensation. Symptoms may become more apparent as a child grows. Forced flexing and stretching are often thought to be responsible for the disease starting in adulthood. TCS is treated with surgery that removes material causing tension, but there is no standard technique established.

Areas needing research: (1) Look for more features and measurements that predict and identify the condition, find out which patients are suitable for studies. (2) Determine how often TCS occurs in EDS patients. (3) Settle the question as to whether TCS is a feature of Chiari malformation Type I (CMI) in EDS. (4) make sure the effects of surgery are better understood. (5) Establish complication rates for TCS surgery in the EDS population.

Movement disorders can be broadly divided into those of too much or too little movement occurring in the conscious state. Disorders of too much movement such as uncontrolled muscle contraction, tremor, fidgeting/dancing movements, twitches, and jerking are reported from EDS patients. Pain and injury are frequent components of EDS, and there is evidence suggesting movement disorders cause these injuries. While there is a strong suspicion of a connection, there are no published studies that confirm movement disorders are a part of hEDS. There is no established treatment for these disorders in patients with EDS.

EDS, especially hEDS, is associated with muscle pain, nighttime muscle cramps involving the calves, floppy (low tone) muscles, and worsening muscle weakness, which to some extent may be the result of avoiding exercise due to overly mobile joints. Most EDS patients use pain medication, and many undergo physiotherapy, in one study two-thirds reported benefit. There is increasing evidence that treatment should consist of a multidisciplinary program. One study demonstrated success combining physiotherapy, cognitive behavioral therapy, and group therapy, followed by individual home exercises and weekly guidance by a physiotherapist. Patients reported improved performance of daily activities, muscle strength and endurance, reduced fear of movement, and increased participation in daily life.

Tarlov cysts are fluid-filled sacs that can develop near the spinal cord, they can put pressure on adjacent neural structures. These abnormalities can be without symptoms, but significant issues can arise such as pain, and bowel/bladder control problems. Of patients undergoing destruction of Tarlov cysts, success is reported in 80–88% of patients, with few complications.

Areas needing research: (1) Determine how common Tarlov cysts are in the general population as well as the hEDS and classic type EDS. (2) Define the ratio of symptomatic versus asymptomatic patients, and what triggers pain. (3) Compare the effects of Tarlov cysts in the general population versus the EDS population. (4) A new trial to compare treatments. (5) Studies of Tarlov cysts in EDS that follow people over time. (6) Best ways to measure symptoms of weak bladder control.

Connective tissue problems seen in EDS can result in diverse nervous system issues from nerves being trapped, deformed or otherwise damaged. Better guidelines, based on stronger evidence are needed for improved diagnosis and treatment.