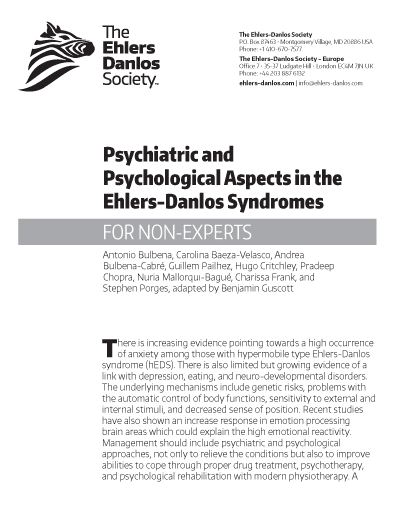 There is increasing evidence pointing towards a high occurrence of anxiety among those with hypermobile type Ehlers-Danlos syndrome (hEDS). There is also limited but growing evidence of a link with depression, eating, and neuro-developmental disorders. The underlying mechanisms include genetic risks, problems with the automatic control of body functions, sensitivity to external and internal stimuli, and decreased sense of position. Recent studies have also shown an increase response in emotion processing brain areas which could explain the high emotional reactivity. Management should include psychiatric and psychological approaches, not only to relieve the conditions but also to improve abilities to cope through proper drug treatment, psychotherapy, and psychological rehabilitation with modern physiotherapy. A broad approach should be implemented to ensure proper assessment and to guide for more specific treatments. Future lines of research should further explore the psychological issues associated with JHS/hEDS to define the nature of a relationship.

The relationship between Joint Hypermobility Syndrome/hypermobile type Ehlers-Danlos syndrome (JHS/hEDS) and anxiety was an unexpected finding that we first described in 1988 at the Hospital del Mar in Barcelona. The coincidence prompted us to study this association in more detail. Prior to this study, there were some scattered observations in the literature pointing to this new direction. In 1957, rheumatologist Rotes-Querol and Argany observed a remarkable degree of nervous tension suffered by patients with hypermobility. JHS/hEDS is a condition associated with problems in the muscles, joints, and bones, possibly resulting from deficiency and genetic alterations affecting the formation of collagen. For the purposes of this article, the syndromes joint hypermobility syndrome (JHS) and the hypermobile type of Ehlers-Danlos are considered as a single entity (JHS/hEDS). In this article, we review the psychopathology associated with JHS/hEDS, as well as the possible explanations for such association, the controversies, management, and future lines of research.

The relationship between JHS/hEDS and anxiety disorders has been widely explored during the past 30 years and current literature supports a solid association between these two. In one study 70% of hypermobile patients had some type of anxiety disorder, compared to 22% in the control group. These findings have been backed up since then, with anxiety repeatedly being linked to JHS/hEDS. Evidence for JHS/hEDS involvement in other disorders is less well established, but some evidence exists for possible association with mood disorders, personality disorders, addictions, eating disorders and psychosis.

Recent research seems to indicate a degree of co-occurrence of JHS/hEDS and some neuro-developmental disorders including attention-deficit/hyperactivity disorders (ADHD) and developmental coordination disorder (DCD). In the area of ADHD, researchers found that adults with ADHD had higher rates of JH and problems with automatic control of body functions (dysautonomia) compared to healthy controls. Other researchers observed high co-occurrence of JH or EDS with ADHD. Concerning DCD, children with DCD have more symptoms associated with JHS/hEDS compared to typically developing children. The relationship between JH and DCD may be due to poor positional sensing in affected children.

Psychiatric and Psychological Treatment for hEDS

There is significant evidence that JHS/hEDS patients take more anxiety medications. High levels of anxiety and depression are frequent in JHS/hEDS and it has been shown that negative emotions may increase the experience of pain. Patients with a JHS/hEDS had high scores for fear of movement, JHS/hEDS patients also have sensitization to pain and bodily signals/sensations. These aspects related to increased perception and/or reduced tolerance of pain might influence the pain experience.

Dysfunctional coping strategies are associated with JH. However, there are no studies exploring the coping strategies in JHS/hEDS; the psychological aspects of pain perception merit more research to develop treatments programs. Some cognitive behavioral therapy (CBT) approaches have been developed and suggested that CBT is valuable in the pain management of JHS/hEDS patients.

Although it is possible that some psychiatric symptoms, risk or defensive behaviors, and personality traits can be a consequence of adaptation and difficulties in dealing with long-term illnesses, biological causes have been considered to explain this association. The genetic link with anxiety should be further explored. Proposed mechanisms include structural differences in emotional-regulating parts of the brain and a link between anxiety disorders and poor control of automatic bodily functions. Anxiety correlates with hypermobility, and hypermobility scores were also associated with other emotional areas in the brain. Different bodily inputs can influence thoughts, feelings, and behavior. Considering the growing evidence of enhanced body awareness and sensitivity among JHS/hEDS, there might be an excess of alarming information which leads to psychological discomfort and psychiatric conditions.

There are some controversies regarding mental disorders in JHS/hEDS that should be addressed. First, patients with long-term pain and decreased functionality often display anxiety and depression, independently of the hEDS diagnosis. Another point is that hEDS is associated with multiple conditions like dysautonomia, which can cause a broad spectrum of physical complaints that can mimic anxiety-like symptoms. For instance, patients experiencing intense heart rate changes could be misdiagnosed with panic attacks. Another example could be the extreme tiredness caused by poor sleep could be mistaken as depression. The key lies in being able to identify the cause.

Another controversy in hEDS lies in diagnosing children when they appear with pain, bruising, dislocations, dizziness, and tiredness. Symptoms of hEDS can be misdiagnosed only as a mental disorder in the child or parent when in fact, both bodily and mental symptoms often coexist. It is crucial that those making assessments of hEDS patients are trained correctly.

The psychiatric issues have to be explored and properly evaluated in patients. Pain, negative feelings, and poor emotion regulation are frequent. The consideration of all these aspects can help develop evidence based treatment such as CBT. Future lines of research: (1) a comprehensive model to understand the illness is needed. (2) Research on the underlying mechanisms is necessary, particularly to find genetic links. The link between pain and body awareness, and their link to psychiatric findings needs to be uncovered. (3) Combined treatments should be developed and tested for better evidence based management. (4) Guidelines of care should be implemented. (5) Preventive strategies, particularly among children should be tested and implemented. This may help to guide for more specific treatments and to avoid undesirable outcomes in the adulthood. However, while the link between JHS/hEDS and anxiety has been well established, there is limited evidence in other mental disorders, these should be investigated.

To conclude, patients with JHS/hEDS often suffer from anxiety disorder and the link has been repeatedly found. There is limited evidence about other links that should be investigated. Comprehensive models including both bodily and psychological symptoms should be taken with their corresponding treatments to manage and treat this condition.