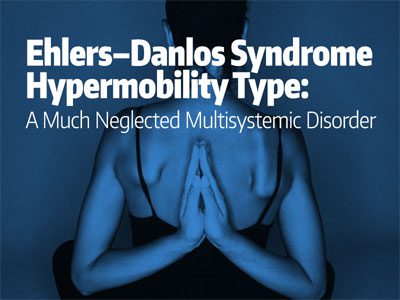 Ehlers–Danlos syndrome (EDS)—hypermobility type (HT) is considered to be the most common subtype of EDS and the least severe one; EDS-HT is considered to be identical to the joint hypermobility syndrome and manifests with musculoskeletal complaints, joint instability, and soft tissue overuse injury. Musculoskeletal complaints manifest with joint pain of non-inflammatory origin and/or spinal pain. Joint instability leads to dislocation or subluxation and involves peripheral joints as well as central joints, including the temporomandibular joints, sacroiliac joints, and hip joints. Soft tissue overuse injury may lead to tendonitis and bursitis without joint inflammation in most cases. Ehlers–Danlos syndrome-HT carries a high potential for disability due to recurrent dislocations and subluxations and chronic pain. Throughout the years, extra-articular manifestations have been described, including cardiovascular, autonomic nervous system, gastrointestinal, hematologic, ocular, gynecologic, neurologic, and psychiatric manifestations, emphasizing the multisystemic nature of EDS-HT. Unfortunately, EDS-HT is under-recognized and inadequately managed, leading to neglect of these patients, which may lead to severe disability that almost certainly could have been avoided. In this review article we will describe the known manifestations of the extra-articular systems.

Pregnancy, Childbirth, and Postnatal Care in EDS and HSD